Community Liaison
#1
A Summer Solstice Bush Trip
Taking advantage of the longest day of the year, we will tour some amazing sites in the western United States, starting in the southwest corner of Wyoming and flying generally south/southwest through the Utah and Colorado to see how many National Parks we can see before sunset! I recommend the Savage Cub for the journey. ETEs for the trip will be calculated using the 91 KTAs (168 kmh) cruise speed. I am using Skyvector.com for making flight plans. I’m not a real pilot and I’m not following real flight planning rules, I’m just making a plan based on points of interest that appeal to me. For the best user experience, I recommend only the provided VFR map, runway photos, and flight instructions for navigation. Feel free to explore the hyperlinks to discover more about the points of interest along our flight.

In order to maximize the day, take off before sunrise at first light with a short warmup flight! Take off from runway 21 and make a slight right turn onto heading 245, which should take you just south of the town of Rock Springs, Wyoming. Continue on this heading, with I-80 as a visual reference off your right wing. After approximately 14 minutes you should be over the town of Green River, Wyoming. On the eastern edge of town, turn to heading 190 and follow this for approximately 2-3 minutes to the Greater Green River Intergalactic Spaceport, which was established for refugees from Jupiter who “might wish to take sanctuary in Green River.” Using heading 190 should direct you to the runway, but once you have visually identified the runway, feel free to adjust your approach for a straight in landing.

Take a few minutes to eat an Egg McMuffin and drink a cup of coffee, because at 6:00 am you depart to fly south along the scenic Flaming Gorge Reservoir, which spans the Wyoming/Utah border. Named by John Wesley Powell for the signature red sandstone cliffs, it will make for some fantastic morning sightseeing. Known for its amazing recreational opportunities, it draws people from hundreds of miles for fishing, camping, boating, and sightseeing. I’ve provided 4 waypoints to guide you if you choose to stay at a higher altitude, but we have a wonderful visual navigation aid for this flight, so feel free to disregard them entirely and follow the Green River south from the Intergalactic Spaceport into Flaming Gorge Reservoir. The reservoir is generally oriented north/south for the first 30 miles of the journey, before taking a slight bend west followed by a sharp bend to the east just past Beehive Point, which is our 3rd waypoint. We will land at the small town of Dutch John, just east of the Flaming Gorge Reservoir dam. Dutch John was originally home for dam construction and maintenance personnel, but is now centered around providing recreational fishing and camping services.

After a short wait for refueling, take off from Dutch John for an amazing canyon trip. This is a longer flight, so feel free to break it into two shorter flights by landing at one of the fields near Waypoint 1. There’s a reason we took a bush plane on this trip, because airports might be few and far between! This is another flight where the waypoints just provide some general guidance, because we’ll be following a couple of rivers.

If you choose to stay above the canyons, you can use the provided waypoints, otherwise dive in and follow the famous fly fishing tailwater section of the Green River southeast toward Browns Park National Wildlife Refuge. Browns Park historically provided high quality wetland habitat for migratory birds, but construction of the Flaming Gorge Dam devastated the wetland habitat by reducing the annual Green River spring floods. A few years after the dam was built, the Wildlife Refuge was created and relies on pumping from Flaming Gorge and adjacent creeks to preserve the wetland habitat. Waypoint 1 is located where the Green River starts a southward bend, and this is probably the best location to stop if you want to break the trip up, otherwise continue south along the Green River.

As you fly south, you will enter Dinosaur National Monument and fly into a tall canyon through the ominous Gates of Lodore, named by John Wesley Powell after the Robert Southley poem “The Cataract of Lodore.” Only the bravest aviators should enter this canyon because we’re just getting started with ominous names! Further into the canyon you’ll find Hell’s Half Mile, a notorious set of river rapids! Waypoint #2 is located just north of the confluence of the Green River and the Yampa River, which occurs where a knife edge ridge/cliff juts out into the Yampa River creating an amazingly tight bend. If you’re flying the waypoints you’ll exit the canyon a this point and turn southwest towards Vernal, Utah flying above the plateau north of the Green River. If you’re up for more adventure, then jump over the knife ridge and drop back into the Canyon through an amazing stretch of river known for great whitewater rafting opportunities and breathtaking sites. You’ll briefly pop out into an open valley but keep following the river into one more canyon featuring Moonshine Rapids, Schoolboy Rapids, and SOB rapids. Once you’ve flown out of the southern end of the canyon, turn west toward Vernal.

Several fields serve as Potential Landing Sites Near Waypoint 1 if you want to break this into two legs, as seen from 096 Approach:

#5
You call that an intergalactic spaceport?

After a 15 minute stop to refuel, take off from Vernal and fly south for approximately 6 minutes to Horseshoe Bend State Park on the Green River, not to be confused with the more famous river bend of the same name in Arizona. From here, turn southwest on a heading of 203 along the Green River. You will pass over the Ouray Wildlife Refuge, a sanctuary for migratory birds. After about 20 minutes, you will see a right bank tributary called Nine Mile Creek, turn onto a heading of 245 and follow the creek canyon for approximately 9 minutes. You will see several fairway looking green fields, pick one of these fields and land your bush plane. This will be a tough landing, and make sure you taxi to teh farend of the "fairway" and turn around so that you can fly back out! Taking off will be even trickier than the landing! Note, about 2/3rds of the way to Cottonwood Creek you will see another green field suitable for an easier landing/takeoff on the right side of Nine Mile Creek, but you'll have a much longer hike if you land here! Get out and take a short hike up Cottonwood Creek to visit The Great Hunt Panel Site

If you're really a wuss, there is a small un-maintained airstrip at the "U" just south of the "fairway" landing on the VFR map:

Community Liaison
#7
I took a video from the final waypoint into the "Fairway" landing site to show a little better how it is hidden by that ridge just to the east. You'll be able to see that ridge pretty clearly from a few minutes flight time out, so I just aimed for the base of it and pulled an IL2 drift turn in for a rough landing. I then show my preferred method for multi-leg trips, just taxi to the other end of the runway and take off. Then you start the next leg in the air at those coordinates. The takeoff on this one is a little tricky in that you have to follow the creek valley to get out. After I take off, I circle back to the south to highlight that Oil and Gas dirt strip runway.

#8
So far you have covered the shittiest places to live in Wyoming and Utah. Got pulled over in Green River once because the boat trailer had a tail light out. Damn small town cop gave me a ticket too.
Defund The Police!!

Also obligatory pictures of the big fish Flaming Gorge is known for. 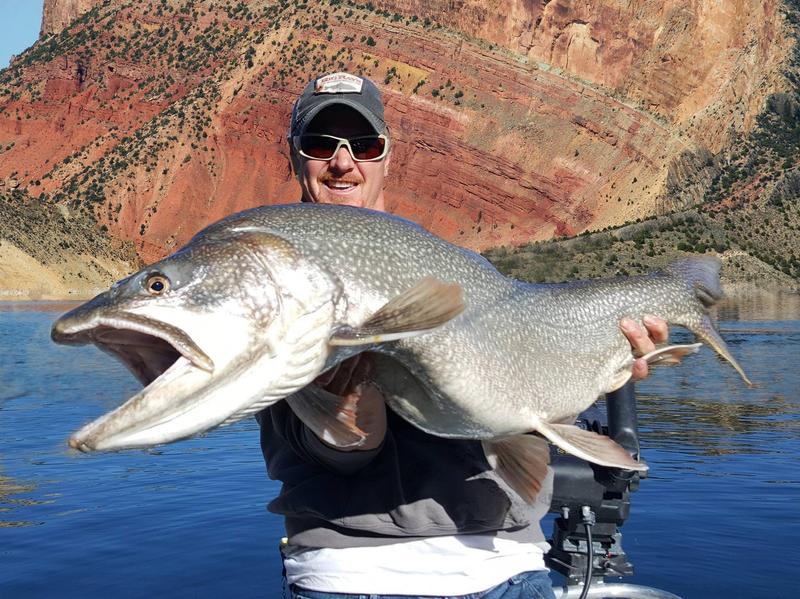 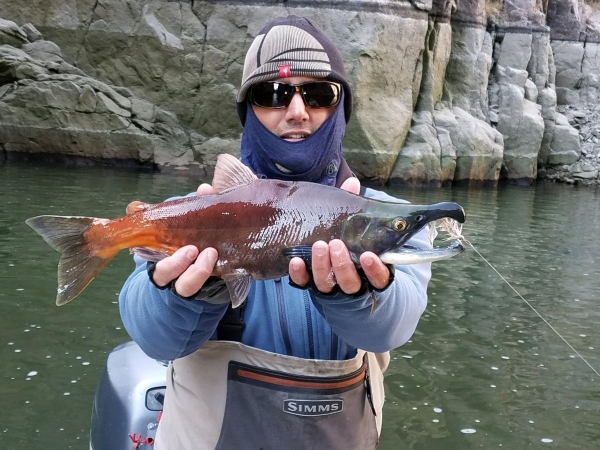 Sent from my LM-V600 using Tapatalk

Take off from the “fairway” and fly down Nine Mile Creek canyon until you can climb out. Re-orient and fly over to the un-maintained oil and gas airstrip to start the next leg of your journey (or take off from here if this is where you landed). Fly at a heading of 155 for approximately 12 minutes to the bend in the Green River where the river turns from south to southwest, just upstream of the Joe Hutch/Cow Swim Rapids, the largest set of rapids in Desolation Canyon, a popular section for floating on the Green River. From here, adjust your heading to 190 and fly for another 21 minutes, slightly diverging to the west of the river. You should see the Green River Municipal Airport(U34) just after you cross over Interstate 70. As usual with the canyon sections, feel free to ignore the headings and just dive down into Desolation Canyon and use the river as your guide. If you take the canyon/river path, the airport will be visible off to your southwest from the I-70 bridge over the Green River.

Green River Municipal Airport (U34) as seen from 190 Heading Approach:

Community Liaison
#10
Heading into the parts of Utah/Arizona that I was excited about! Then I saw this on Reddit yesterday:

That made me check out Google vs Bing at Arches national monument because that's my next stop. Not great, lol. I'm still going to have fun with this bush trip, but there is real potential that it gets better in the future!

Take off from Green River Municipal Airport (U34) and turn southeast on a heading of 095 degrees toward the northern tip of Arches National Park. This is a longer flight and will take you to several popular hiking areas. Feel free to land near one of the trailheads if you want to break the trip up and go for a hike! It’s THE SIM so we can land wherever we want to go explore! The first major point of interest we encounter is Tower Arch on the west side of the park, this apparently takes a longer hike or a 4 wheel drive vehicle trip to approach, so it is one of the less crowded arches which makes it a favorite for those looking for some solitude! The second point of interest is Devil’s Garden Trailhead, a popular hiking destination where you can see 7 arches in a relatively short and flat hike under 2 miles. The third point of interest in the park is Windows Trailhead, another easy hike to Windows arch and the famous Double Arch. The prescribed flight route takes is a loop through the park, ending at the visitor center before flying back northwest on a heading of 313 to Canyonlands Field (KCNY). Feel free to explore more of the park on your own terms, if you find your way to the visitor center at the end, it’s still an easy shot to Canyonlands Field. Some pre-sim scouting has shown me that the terrain/photography aren’t great for the arches, so this is a leg you should probably revisit when Bing improves their coverage of the area or modders try their hand at Arches National Park.

A view of the famous double arches from the Windows Trailhead!

I'm so excited for @Microsft and @Bing to catch up with google!

@Reel talk, this leg was a bit disappointing but I expect it to get better in the future via updates to Microsoft's data or modders. I'll edit this post with info when that happens!

#13
You should head over to Goblin Valley and Capital Reef, they should hopefully look cool. Wonder if you can fly through some of the slot canyons.